The List Editor controls the flow of the music and is (in its simplest form) a list of up to 128 track rows which are played from the top down. 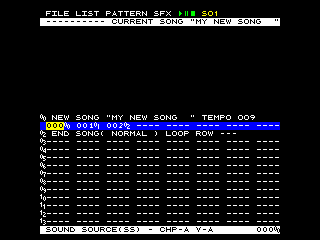 The List may be further divided down into individual Song sequences starting with a New Song and ending with an End Song and containing (in rows between) other commands and Track events. Each Song section holds all information about the song.

The New Song and End Song (as well as a number of other commands) are known as Row Wide Commands or RWC's. RWC rows effect any row below it but do not consume any conceivable time to be executed. There is no limit to the number of RWC's that can exist in a single song but any single sequence should not duplicate RWC's too much since they still consume processor time to execute.

All RWC's come with two parameters. For New Song this consists of a Song Name and a Song Tempo (which can be changed later on).

For further information about these and other RWC's please look below

Track Rows contain 8 tracks. Each Track may be a Track Rest, a Track Pattern or a Track Mimic.

A Track Rest rests the Track for the row. It is used to identify when a particular track will not be used on a Track Row.

The Pattern field points the Track to a specific pattern (the sequence the holds the actual notes). 127 Patterns are available may be spread across all tracks. The Pattern field contains the Pattern Number from 000 to 126.

The Sound Source or SS field indicates the Sound Source to associate the Pattern to. This ID is a value from 00 to 19. The Sound Source definition is displayed in the status bar at the base of the screen whilst the List cursor is on a Track Row.

The Following Sound Sources are available. Track Sound Sources are split into Pitch and Volume resources and this is reflected in the Acronyms(Respectively) given on the status line. Depending on resource the range of values will change for both Pitch and Volume. Note that Sound sources for EG and Noise show values in the Pattern editor rather than Notes and the value is directly written to the AY(Observing Sharing).

Placing the same SS on different Tracks will introduce Sharing between Tracks whereby each Track is given an equal time-gap to act upon the resource before it is passed to the next Track. A maximum of 8 tracks may share the same resource.

In Addition to the list above there exists a Sound Source which exclusively assigns Track H as a Command Pattern. This permits a single Track to bestow commands whilst in the Pattern.

The Mimic Track type permits the Track to Mimic(or copy) what the track to the Left or Right is doing. It also provides parameters for modifying the Tracks Pitch, Volume and Time-Delay. A Mimic must still be provided with an SS ID which can be the same or different resource to the mimicked Track.